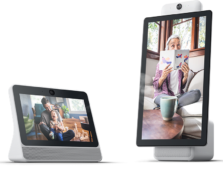 I was more than a little skeptical about the actual use of this device because I really like the Echo Show with its many cool features.  Basically, the Facebook Portal and Facebook Portal + are in-home hands-free video calling devices to connect you with friends and family via Facebook Messenger.  When I got the Portal + to test, I was pleasantly surprised at how easy it was to set up.

What could be improved

I enjoyed playing with the Portal+ much more than I thought I would.  It definitely has the ability to connect family and friends who live far apart or who are unable to see each other often.  There are so many fun options such as the Storytime program or the artificial reality masks.  I was also impressed by the many accessibility options already built in for such a new device.   The Facebook Portal is worth a consideration if you and your family already use Facebook to keep in touch.