Posted on October 03, 2012 by Mike Chaussee in Uncategorized 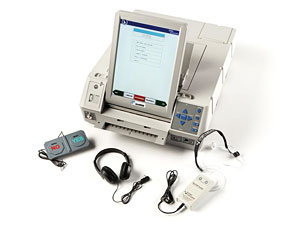 As a result of the Help America Vote Act (HAVA) passed in 2002, North Dakota responded to the requirement for accessible voting systems and entered into an agreement with ES&S to provide the AutoMARK in all precincts of the state. Since 2005 all state voting sites are to have the AutoMARK available and also are to have personnel on hand during elections to assist voters in its use.

The AutoMARK  functions as a combination of several devices: a scanner, printer, touch screen display, and input device. The data for any specific election is stored on a compact flash card. Using proprietary software, an election official is able to convert election data from the regular ballot for use in the AutoMARK. When a voter inserts their ballot into the AutoMARK , it searches for a match to the precinct identification code found on each ballot and when found allows the video and audio display of its contents. The voter is then able to carry out their voting by using the touch screen, a puff-sip device or their own switch access device, or by following audio prompts through a headset along with using the Braille-coded keypad. Additionally, there is a screen privacy option so that voters with visual impairments can be assured that their voting remains private.

Navigating through the election ballot is made simple with text and audio prompts, as well as reminder screens that alert you to having over or under-voted for any particular contest. An additional plus is the verification page that summarizes your selections and allows you to return to any particular spot on the ballot. Once satisfied with your choices, selecting the final “Mark Ballot” will trigger the AutoMARK to mark your ballot and eject it from the front tray.  If the returned ballot is not to your approval, you may request another ballot from the election officials and try the process again.  If acceptable to you, you’re on to depositing it in the collection bin(s) with everyone else’s ballots.

Beginning this Spring, IPAT has been involved in an accessible voting technology grant project (RAAV) that has resulted in dozens of personal demonstrations to voters with vision impairments or motor challenges all across the state. Your own demonstration can be scheduled through contacting us at either our Fargo or Bismarck centers.

See the recent video clip of Peggy Shireley from our Bismarck center showcasing the AutoMARK for KX News. On the video she shares stories about 2 voters with vision challenges and how the AutoMARK has helped them feel re-connected to their communities!